Youssef Msakni’s hat-trick helped Tunisia move closer to Russia with a 4-1 away win in Guinea as the Democratic Republic of Congo kept their faint hopes alive with a 2-1 win over Libya.

In Conakry, Naby Keita scrambled the hosts into a first-half lead but Youssef Msakni equalised for the Carthage Eagles just before the break.

Msakni completed his hat-trick right at the death, just after Guinea’s goal scorer Keita was sent off. Tunisia stay top of the group with 13 points and only need a draw in the final group game next month to seal a spot in Russia.

In the other Group A fixture, DR Congo beat Libya 2-1 in Monastir in Tunisia, as Libya cannot stage home matches due to security reasons.

Cedric Bakambu put the Leopards ahead five minutes into the second half.

Libya levelled through Elmutasem Al Musrati, but the comeback only lasted five minutes as Wilfred Moke capitalised on a poor defending to restore DR Congo’s lead.

DR Congo failed to add to the goals as Libya kept them out.

The final fixtures in the groups will pit Tunisia against Libya and DR Congo against Guinea on 6 November.

Only the group winners will qualify for Russia 2018. 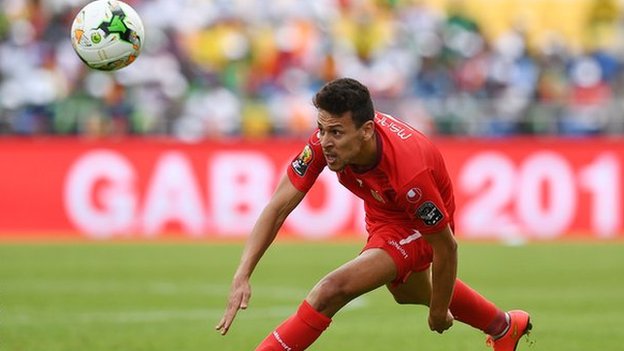