Across Ghana, the irreversible effects of child malnutrition can be seen among thousands of children affected during their critical first 1,000 days of life.

This is the time in a child’s life that will determine their health as adults, their ability to learn in school and to perform in future jobs.

A group of photographers and researchers organised by UBELONG went to Ghana to uncover the complex stories behind this problem.

Nana has been the chief of the farming community of Bentum for 35 years, although two years ago he sold most of the farming land in the area to a developer.

As a result, most local villagers lost their livelihoods, and now struggle to feed their families.

The signs previously used to identify farm boundaries lie discarded by the road.

“I am very proud to be the chief,” he says. “It’s not easy. No-one will take my land. I know my people in Bentum cannot farm anymore.

“But whatever you do for food, is on you.”

While at home with her mother, Kate tells the story of how one of her daughters died aged two.

Ever since her husband died, a decade ago, she has struggled to find work and take care of her four children.

They are malnourished and often get sick as they eat only banku, a Ghanaian dish of fermented corn and cassava dough.

“God took my two-year old daughter. She was not feeling well, so I put her to bed. Later that evening, there was a bad storm,” she says.

“The sky was loud and angry. I heard an explosion in the clouds. When I went to check on my baby, she was dead. I believe the thunder killed my baby.”

Hannah stands surrounded by the yellow buckets of rainwater she collected the night before.

She never attended school, and started working at a very early age as a fishmonger. She is married to a fisherman who is often away for weeks.

“My kitchen is empty. I have no food,” she says. “My children don’t even eat the little food I give them. I don’t know about malnutrition. I just pray my children become great people”.

Rebecca’s children receive over-the-counter medical remedies from the local shop, instead of professional healthcare at the hospital.

Like many women in the village, Rebecca doesn’t receive much support from the father of her children. She feels she has nowhere to turn.

“Women don’t support each other here, it’s not something we do.”

Beatrice and Joy are in charge of the childcare and malnutrition unit at the Kasoa Clinic.

A few community nurses cover an area with more than 30,000 people, and Beatrice estimates only about 20% of the malnourished children are brought to this clinic.

“So, we mostly identify malnutrition cases by talking to neighbours. Our most important job is to provide a safe environment to counsel them about their children, so that they don’t feel embarrassed about bringing them here.

“But our effort is just a drop in the ocean.”

Christy stands with her youngest daughter besides the farm where she used to work in Bentum, a community plagued by poverty and child malnutrition.

When the village chief, Nana Agya Kwao, sold all the farming land in the community, it meant she could no longer work.

“No-one here can access their farms. I was able to feed my four children before, but there is no food anymore and no jobs in this village,” she says.

“I struggle to earn a quarter of what I made before.”

Mary holds a bottle of glucose that a nurse gave her at the clinic, to combat the malnutrition symptoms of her newborn baby.

She could not breastfeed her son, who was very small at birth.

Despite giving glucose to her baby, he died six weeks later, at just two months old.

Local tradition mandates that when a baby dies of malnutrition, the baby is taken away. Mary and her husband were not allowed to attend their son’s funeral.

This project was organised and produced by UBELONG, a social venture based in Washington DC in partnership with Newton Europe, a UK-based consulting company. 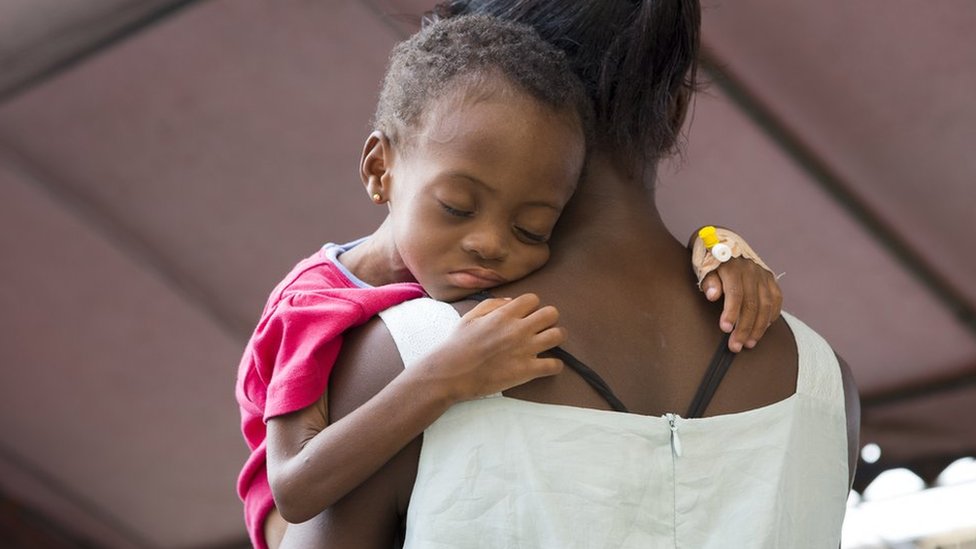