Liberia’s former President Charles Taylor is currently serving a 50-year sentence for war crimes in a prison in the British city of Durham. But is he using that as a base to interfere in the elections in his homeland next Tuesday?

“If he was to come back today, I’d roll out the red carpet,” said Justin Luther Cassell, a 32-year-old man sitting outside the Pray for Peace Business Centre in Gbartala, central Liberia.

Gathered round on plastic chairs, drinking beer and discussing the forthcoming Liberian elections, the men here are clearly frustrated.

This was Charles Taylor’s rebel headquarters in the 1990s.

The former military base may be crumbling, with buildings almost completely engulfed by the jungle, but Taylor’s name is still as strong as ever in Bong county.

More than five years since the former president was sentenced for war crimes committed in neighbouring Sierra Leone, people in his heartland are still harking back to the old days.

“Even with the sound of the gun, life was better,” said one frustrated young man, bemoaning the lack of basic necessities in the country.

In an unlikely alliance, former world footballer of the year George Weah, who is running on the presidential ballot for the third time, has chosen Taylor’s ex-wife, Jewel Howard Taylor, as his deputy.

Having historically been a staunch critic of Taylor and his National Patriotic Party (NPP), questions are being asked of the motives.

The union between Mr Weah’s Congress for Democratic Change (CDC) and the NPP came just before a phone call from the former warlord was broadcast to a gathering of his supporters on his birthday in January this year.

The call was made from inside a high-security prison in Durham.

He is heard saying that “this revolution is his life”, he advises his people not to betray the party: “Go back to base and everything will be fine.”

Rodney Sieh, editor of Front Page Africa – the Liberian paper that published the call – said he was sure that Taylor knew that “he was speaking to an audience”.

Taylor wanted his people to know that he was still relevant, according to Mr Sieh.

“He still wants his voice heard” in the Liberian political scene, he said.

Mrs Howard Taylor has made her allegiance to her ex-husband clear.

In an interview with local journalists outside a campaign rally, she said that the country needed to get back to the “agenda” outlined by Taylor when he was president.

But she denied that he was influencing the 2017 elections.

Speaking to the BBC after a friendly football game just outside the capital, Mr Weah admitted to taking a call from prison.

But he rejected the idea that strings were being pulled.

“Charles Taylor is not running the campaign for us,” he said.

Defending his choice of running mate he said simply: “People love her, she was the mother of this nation.

“If Charles Taylor was campaigning for me, I think the world would be aware.”

But the world is aware of the alleged interference and it is concerned.

Since news broke of the phone call, the US Congress passed a resolution that condemned any “external interference” in the poll and specifically any attempt by the convicted war criminal “to influence the elections from prison”.

The EU mission in Liberia has also released a statement to clarify that no Liberian president would ever be able to overturn the sentence and bring Taylor back to Liberia.

But if Taylor himself was to be believed when he left Liberia to be exiled in Nigeria on 11 August 2003, his intentions were clear.

“God willing, I will be back,” he said at a resignation ceremony in the capital.

Observers are concerned about meddling that could go beyond election day itself.

Mr Sieh told the BBC that Mr Weah now has some of Taylor’s closest aides around him.

“He may not be here physically but he could influence a lot of things if one of these people are elected,” the editor said.

Mr Weah and Mrs Howard Taylor’s main opponent is considered to be Vice-President Joseph Boakai – or “Sleepy Joe” as he is commonly known. because he is often caught napping at public events.

The 73-year-old has served as vice-president under Ellen Johnson Sirleaf, Africa’s first elected female president, for the past 12 years. But rumours of a rift between the two are rife.

“A lot more needs to be achieved,” he told us when we caught up with him on the campaign trail.

“The Liberian people want to see development and someone who can unify them.”

Asked about his nickname he smiled and said he is “a dreamer”, but whether he has the charisma and dynamism to captivate Liberia’s youthful population, only the vote on 10 October will prove.

They have 20 candidates to choose from.

Although many commentators predict a second round between Mr Weah and Mr Boakai, former Coca-Cola executive Alexander Cummings, who came on to the scene 18 months ago, is fast becoming a serious contender.

A candidate needs more than 50% of the vote for a first-round victory.

According to Mr Sieh, with his door-to-door strategy, Mr Cummings has changed the way campaigns are carried out in Liberia and he might just make it to a run-off.

But for most Liberians, the most important thing is peace.

Hundreds of women across the country are fasting and praying for a peaceful election.

Just opposite President Sirleaf’s private residence, 44-year-old Bernice Freeman is one of more than 100 women gathered under a tent providing shade from the hot sun.

“Every woman here has a very bitter past,” she said with a determined look in her eye.

“Some of us were raped several times, we are tired.”

The power of these women cannot be underestimated – this same group is credited with bringing an end to the conflict by forcing the warlords to engage in peace talks.

Nobody here wants a return to those days. 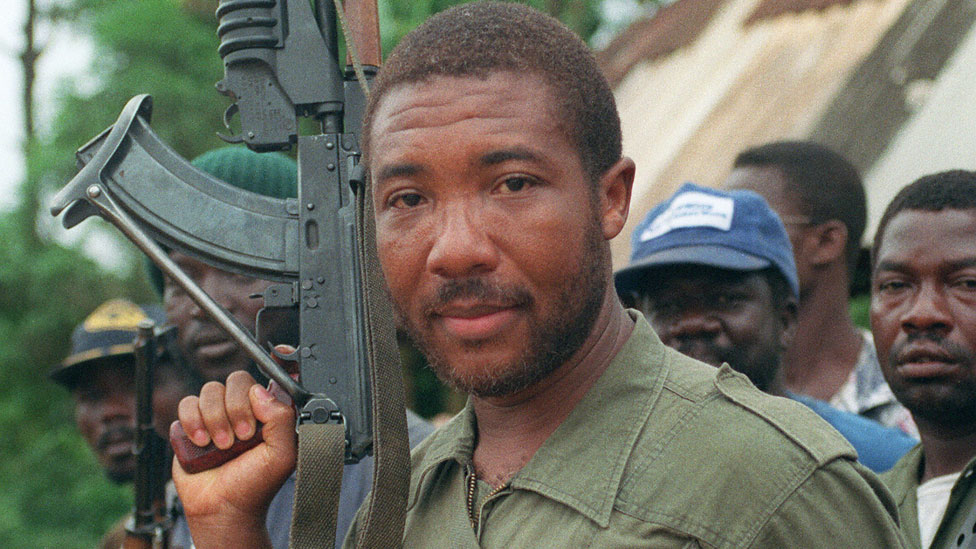