Mohamed was forced to fight for Boko Haram until a commander’s wife, Aisha, persuaded him to escape and a four-year-old boy tagged along. The BBC’s Stephanie Hegarty met them in an army base in north-east Nigeria.

A young boy is sitting under the shade of a wide neem tree, playing with sticks in the sand. A man, not his father, is watching him closely. And a woman, not his mother, picks him up to go inside.

This mismatched family of three has been brought together by the most tragic of circumstance.

Until very recently they were total strangers. But they have one thing in common, they were living with Boko Haram in a camp deep in the Sambisa forest before they escaped, just over a month ago.

We came to this army base in the north-east to meet the man, Mohamed (not his real name). He was a member of Boko Haram until he decided to run away from the group and surrender to the Nigerian army.

From what he tells me, Mohamed must be in his 30s but the wrinkled frown fixed around his eyes makes him look older.

He is small with a sturdy frame and wearing a new stripy blue polo shirt given to him by the army – who have facilitated our meeting. When he came out of the forest he said he had nothing.

Mohamed joined Boko Haram three years ago, when they took his home town of Banki.

He had a small business there buying, selling and repairing mobile phones. As the militants approached, he ran hundreds of miles away towards the border with Cameroon.

Trapped by a friend

But a friend convinced him to come back to take care of his business, assuring him it would be OK. When he came back, the friend forced him to join the group.

“He made me carry his rifle,” he said. “I knew he was Boko Haram. I didn’t want to join him but I didn’t have a choice. I knew he would kill me.”

For three weeks they rode around attacking villages in the area. He said he disagreed with what they were doing but he feared for his life.

“We were just roaming around from village to village to round up women to marry.”

Soon afterwards, they were pushed out of Banki by the Nigerian army, to a base deep in the Sambisa forest – a vast area on the border between Nigeria and Cameroon.

“Our camp was located deep inside the bush where there are big, big trees and we used aluminium roofing sheets to build big houses from mud where we all stayed,” he said.

“There were about 500 in each camp. Each camp was named for a town. I counted at least 12 camps.”

But the marauding continued. In his time with Boko Haram, Mohamed said he fought in six battles.

“When we captured a town, the emir that led the conquest would be the leader of that town. People were in their houses and we would go house-to-house collecting the women.

“Some of the men ran, but if they were members of the vigilante we would kill them.

“When we went out to attack, we shot indiscriminately, I have no way of knowing how many people I killed.”

Phone shop in the forest

For the first few years, the militants seemed to be well funded. They paid foot soldiers a wage but when the army bombed the place where they kept the money those salaries dried up.

So Mohamed set up shop in the forest, buying and selling phones.

My husband knew I wanted to run away

“Everybody had a phone. If we go to war, they collected people’s phones, they gave them to me and I would sell them.”

Soon, he was appointed as a bodyguard to a senior commander and had some insight into the workings of the upper echelons of Boko Haram, although he didn’t know where the money came from.

He told me that as an ordinary soldier he never met the group’s leader, Abubaker Shekau.

But Shekau would send one of many emissaries from his hiding place to give orders to commanders.

As a bodyguard, Mohamed was tasked with guarding the commander’s young wife, Aisha (not her real name).

Aisha was captured with her young daughter three years ago in the town of Mubi. She was forced to marry three times, each time chosen by a senior commander.

“The commander taught me how to shoot,” Aisha told me. A few years into her detention, her two-year-old daughter got sick and died.

She was desperate to escape.

When we spoke, she shielded her lips with her headscarf. She was shy and soft-spoken but defiant.

“My husband knew I wanted to run away,” she said. “That’s why he told his bodyguard to follow me everywhere”.

But Aisha saw something in this bodyguard that she didn’t see in other Boko Haram members. “I knew he was a nice, kind-hearted man,” she said. She decided to convince him to escape.

They started plotting but Mohamed was afraid.

He thought the military would punish him if they surrendered. But Aisha had listened to BBC Hausa radio programmes in the bush and heard that the army was offering amnesty to Boko Haram members who defected and she told him it would be OK.

They were caught meeting late at night, the commander thought they were having an affair and they were tied up.

But Aisha managed to loosen the rope around her wrists, she freed Mohamed and they ran.

“I knew the area very well so we just followed the bush,” Mohamed explained. They reached a military roadblock and raised their hands in the air to surrender.

Since the surrender they said the army has been treating them well. Though we spoke to them in the presence of an army spokesperson, they seemed relaxed.

Aisha and Mohamed put their escape down to the fact that Boko Haram was in disarray.

One of the group’s senior commanders and a founding member, Mamman Nur, defected last year to form his own faction.

He took with him many militants and a lot of the arms, ammunition and even tanks that the group had amassed in attacks on the Nigerian army.

According to Mohamed, the defection was the result of a profound ideological difference.

“Mamman Nur abhors Shekau’s use of bombs in towns – the use of suicide bombers, especially women, to attack towns, churches, mosques and markets,” he said.

As I spoke to Aisha and Mohamed, the little boy who was with them roamed around under their watchful eyes – making the random exclamation of a happy four year old as he kicked about in the sand.

When they ran out of the bush that night he had followed them, they explained.

They didn’t know his name but Aisha recognised his face – she had met him once with his mother in her life before Boko Haram.

She doesn’t know where his parents are now.

We were told by the soldiers accompanying them that Aisha, Mohamed and the boy will be enrolled in a “deradicalisation programme”, run by the Nigerian government.

The government is hesitant to share any details of that programme.

Now their future lies in the hands of the authorities and it is up to them whether this small family of strangers will be allowed to stay together or not.

Who are Boko Haram?

Jihadist groups around the world 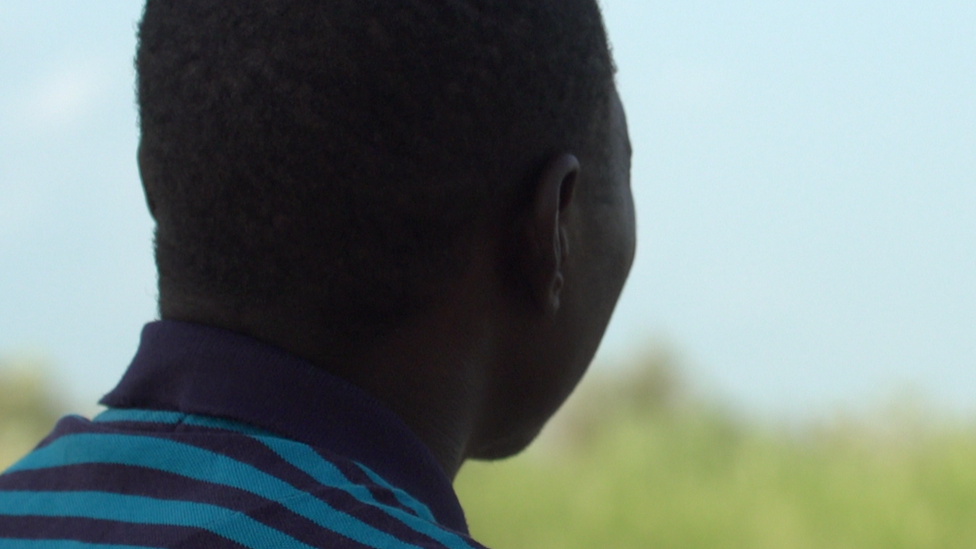 Why is Africa building a Great Green ...