Hosts Ghana are hoping that their West African Football Union (WAFU) Cup of Nations triumph over Nigeria will help ease the pain of failing to qualify for the 2018 African Nations Championship (CHAN).

The local Black Stars beat their arch-rivals Nigeria 4-1 in Sunday’s final to lift the trophy.

Nigeria, who had won a group game against Ghana 2-0 earlier in the tournament, had not conceded a goal in five outings leading up to the title decider.

The Nigerian clean sheet stretched to 494 minutes before Stephen Sarfo broke the deadlock a minute before half-time in a match watched by Confederation of African Football president Ahmad.

Vincent Atingah converted a penalty on 63 minutes to double the lead at the Cape Coast Stadium.

When Ghana were awarded another spot-kick 13 minutes from time, Sarfo scored to raise his competition goal tally to four and put the outcome of the final beyond doubt.

But the humiliation was not over for Nigeria as Winful Cobbinah scored a fourth goal for rampant Ghana three minutes into stoppage time.

Ghana coach Maxwell Konadu (pictured) said the victory goes some way in making up for their failure to qualify for the 2018 CHAN.

“We came into this competition under pressure because we lost to Burkina Faso at home and failed to qualify for the CHAN tournament,” Konadu said after their victory.

Victory swelled the Ghana Football Association bank balance by US$100,000 thanks to sponsorship from an American news channel, with Nigeria receiving US$50,000.

Niger came third by defeating Benin 2-1 in a curtain-raiser to the final.

Because the 16-nation tournament was staged outside a Fifa international window, teams relied mainly on home-based stars. 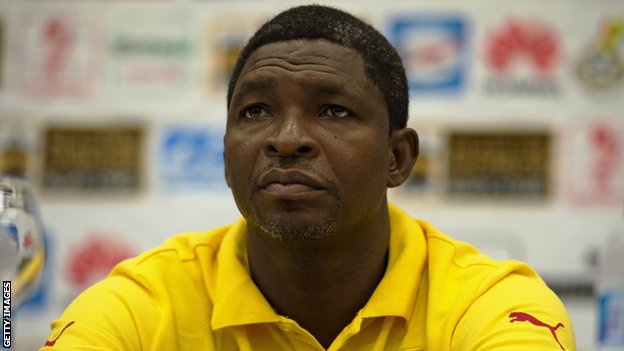