The 32-year-old made 56 appearances, scoring three goals, and shone at the 2014 World Cup in Brazil.

Former Algeria manager Vahid Halilhodžić described him as ‘someone you can trust with your life to give his best in an Algeria shirt’.

“I was immensely proud to wear the Algeria colours, but the time has come to give others a chance to do the same,” Medjani told BBC Sport.

“I will continue to support my country as a fan and wish the team all the best,” added the Sivasspor player, who can play in defence or midfield.

Born in Lyon, Medjani represented France at different youth levels before switching allegiance in 2010 to his father’s country, for whom he made his debut against Gabon in an August friendly that year.

Medjani was an integral part of the Algeria squad that reached the second round at the 2014 World Cup in Brazil before then reaching the quarter-finals of the 2015 Africa Cup of Nations.

Rewarded with the captaincy after the World Cup, he was omitted from the 2017 Nations Cup squad and has played a bit-part role for Algeria this year.

His last appearance came as a late substitute in June’s 1-0 victory against Togo in a 2019 African Cup of Nations qualifier.

After catching the eye with his performances at youth level with Saint-Etienne, Medjani was signed by then Liverpool manager Gerard Houllier in 2003 on a five-year contract.

But after his first year in England, Houllier had been replaced by Rafael Benitez and Medjani felt “it was difficult for a French player to play under a Spanish coach who didn’t want me.”

Since leaving England, Medjani has played widely across Europe, with spells in France, Greece, Spain and Turkey. 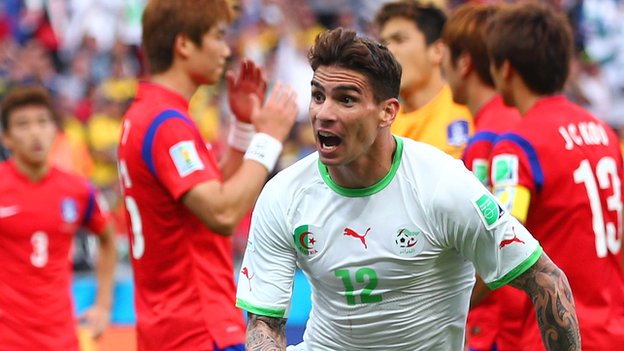