Islam Slimani’s superb strike helped Leicester see off a wasteful Liverpool at the King Power Stadium to reach the fourth round of the Carabao Cup.

The Algeria striker’s left-footed shot found the top corner after substitute Shinji Okazaki had put the Foxes ahead.

That came after Liverpool had dominated a first half in which Philippe Coutinho impressed before being replaced.

Okazaki’s arrival sparked the Foxes into life and he latched on to Vicente Iborra’s knockdown for the opener.

Summer signings Alex Oxlade-Chamberlain and Dominic Solanke both missed good opportunities for the visitors, who named a much-changed side.

It took Tottenham 65 minutes to break down a resolute Barnsley at Wembley, while Leeds beat Burnley on penalties at Turf Moor.

Joshua King scored in extra time to send Bournemouth through against Brighton, as Middlesbrough knocked out fellow Championship side Aston Villa and Swansea won at Reading.

A tale of two substitutions

Coutinho, having returned to the Liverpool side for the 1-1 draw with Burnley on Saturday, was by far the best player on the pitch in the first half as he sauntered between the lines to dictate the tempo of the Reds’ attacks.

The tricky Brazilian combined well with Andy Robertson as the former Hull left-back, another summer arrival, put in several crosses that should have been converted.

That we concede like this, that makes me really, really sick

Oxlade-Chamberlain, making his first start since a £35m move from Arsenal, had a shot blocked from a smart Robertson cut-back before Solanke headed off target from another pin-point ball.

But Liverpool boss Jurgen Klopp opted to replace Coutinho with Ben Woodburn at the break and, despite some impressive running from the 17-year-old Wales international, the team lost their flow.

Klopp said it “was always the plan” to give Coutinho 45 minutes, but his departure was countered with the arrival of Okazaki for the Foxes, the Japan striker adding pace and intensity.

He reacted first to fire low into the corner for the opener with 25 minutes remaining, then teed up Slimani for a fantastic solo effort that put the game beyond the visitors.

Liverpool had 35 shots on goal when they were held by Burnley at the weekend. It was a case of deja vu for travelling Reds supporters on Wednesday.

Despite making eight changes, Klopp’s team mustered 21 shots at the King Power Stadium on top of 70% possession, but to no avail.

A long-range Demarai Gray effort came from one of Leicester’s rare first-half forays, but when the winger dragged wide after the interval it was the first sign of a shift in momentum.

Okazaki’s breakthrough came after Liverpool failed to clear a corner – a problem that has haunted them this season, with Klopp admitting afterwards he was “sick” of conceding such goals.

“That we concede like this, that makes me really, really sick,” said Klopp. “You cannot play football and do that.

“The story of this game is really easy to tell: we were the much better team in the first half, we played good football, we didn’t score, that’s sometimes part of football.

“But as long as we concede goals like we conceded today, then it is quite difficult.”

Gray could have added gloss to the scoreline as Liverpool looked for a way back into the game late on, only for goalkeeper Danny Ward to turn his strike wide of the post.

It meant a fourth game without a win for Liverpool, whose last victory came against Arsenal in August.

Liverpool travel to Leicester again on Saturday, this time in the Premier League for a 17:30 BST kick-off. 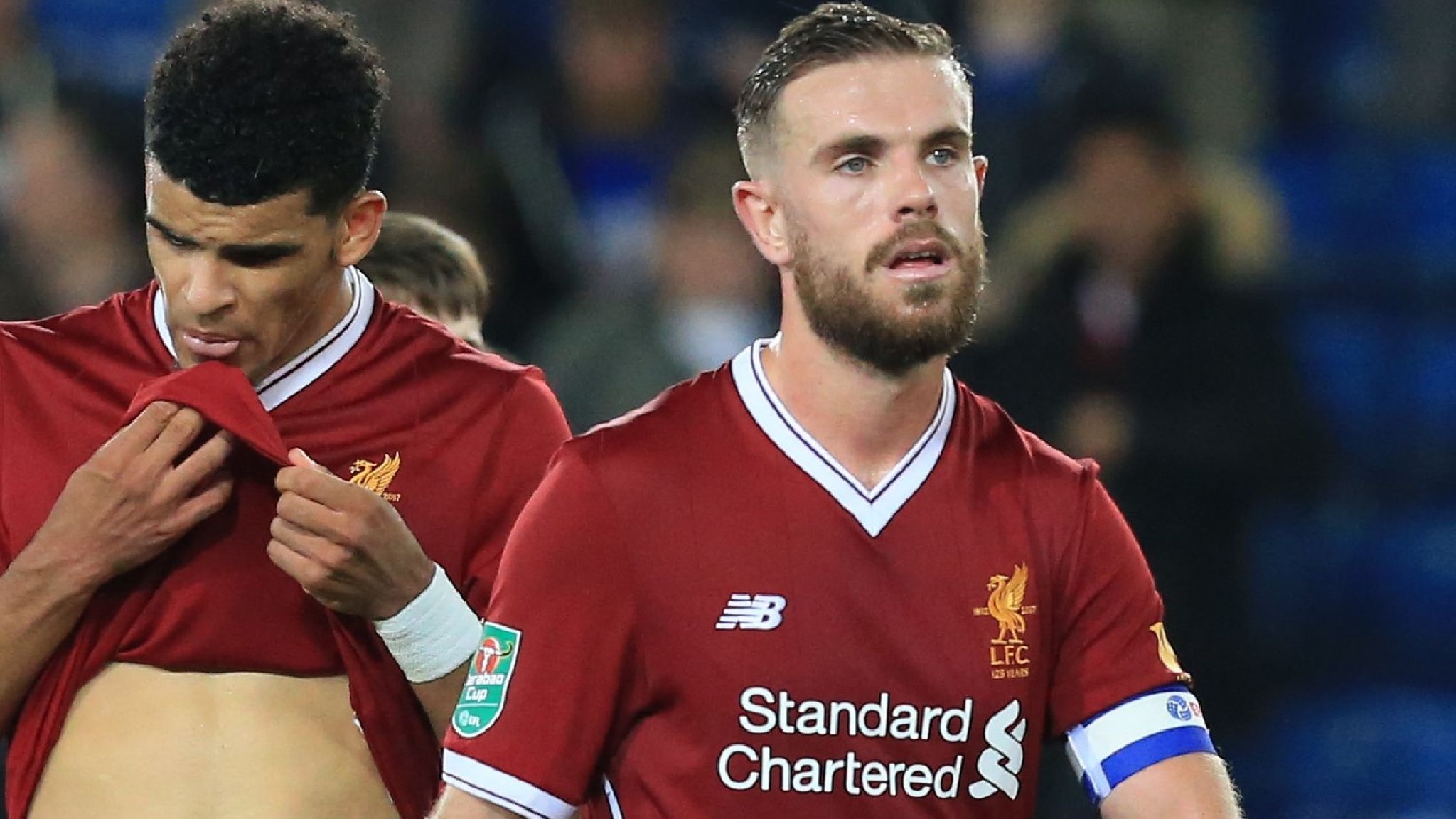