In sub-Saharan Africa, conflict and climate change have had a major impact on food security. Communities in Niger, Burundi and Central African Republic are experiencing dangerous levels of hunger and malnutrition.

As well as exploring how political and environmental instability can reduce people’s ability to grow or buy food, de Bode also shows how charitable interventions can help.

Twenty-eight year-old Daniel Nsabiyaremye had the skills to be a carpenter but lacked the tools. After a series of loans that he spent on a hammer, spanners, saw, plane and a square set, he was able to launch his now thriving business.

“I bought the tools, one by one, from the money transfers I received,” he says.

“Now, I don’t lack the means to put food on the table. Before the programme, we used to eat once a day – and often it was a poor meal, consisting of cassava leaves and green bananas. Now we eat twice a day. It has meant a positive change in the health of my children and me.”

Joseph and Nyambaronziza are both members of the marginalised Batwa community. The Batwa are pygmies, well known for their height – or rather lack of it.

They both struggle to provide for their families living in dilapidated homes on the remote forest hillside in Kabere, Uganda. They earn money from occasional labour, cultivating land or looking for gold in the nearby river.

Denise Nyamwiza, 20, is responsible for her younger siblings after their parents died of malaria two years ago.

She searches for casual labour and sometime makes money from selling avocados and ground sunflower seeds that she grows on her small plot of land.

Solange Wanibilo stands with her extended family, outside their home in the village of Bomandoro, Central African Republic. Solange’s youngest child Arthur and her grandchild Frank are both malnourished.

Golden Marlenue stands outside her home with her four young children.

Her two youngest children Naomi, two and Athanase, 12 months, are both malnourished. However, three weeks ago the nearby Ndanga Health Post was reopened so that the children can now get the treatment and support they need.

In Boganando, Central African Republic, Josephine Zawele stands in a farmer’s field school alongside other members of her community. This field school is used by local farmers to learn new agricultural techniques that they can then replicate on their own land.

Hadijatou Cheihou, 15, lives in the Nigerien village of Gao Moussa, which has become well known locally as a fine producer of groundnut oil. Hadijatou is an original member of a group of 30 women who were trained in the production of the oil.

Now more than 90 women in the village are involved. The oil is so sought after that people travel from more than 45 km (28 miles) to purchase it.

In Kosama, Niger, Hassana Abdourahamane smiles alongside other members of a community farming group.

On land loaned to the women, they grow vegetables including onions, tomatoes, potatoes, carrots, cabbage and aubergines. Initial seeds and training were provided by a charity called Concern, but the women are now self-sufficient because they are able to sell some of what they grow.

Salifou Ahment, a 70-year-old farmer, used to struggle to feed his livestock during the dry season when grassland becomes scarce.

Now, instead of having to travel miles to buy food, there is an animal feed bank a short walk from his home. The bank, run by the community, keeps animal feed in stock all year round and sells to local farmers at a fair and affordable price.

The photographs can be viewed in the courtyard of St Martin-in-the-Fields near Trafalgar Square, London from 19 September. 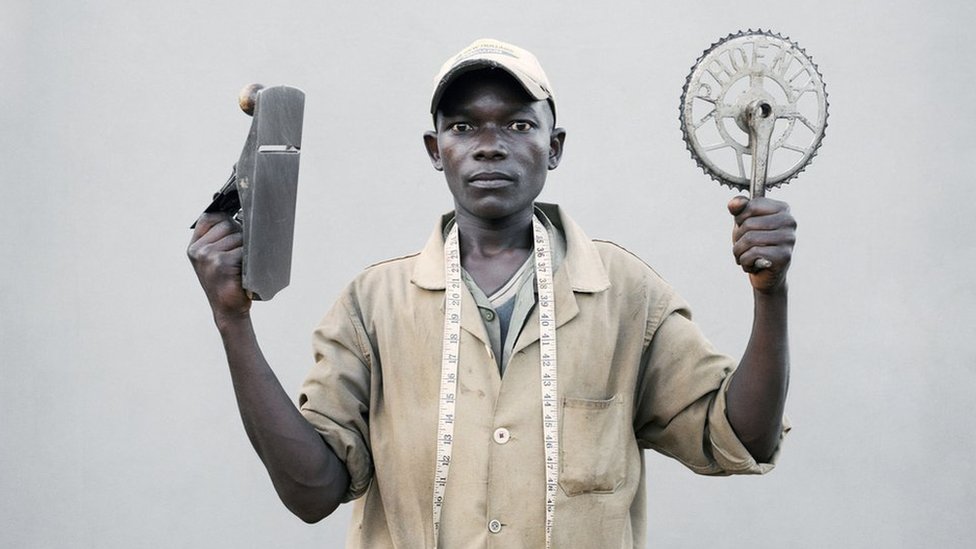 ‘It’s OK to make mayonnaise while on ...