Irishman Ibrahim Halawa, 21, has been acquitted on all charges he faced in Egypt.

Mr Halawa, who is from Dublin, was arrested during a siege at the Al-Fath mosque in Cairo in 2013.

He was accused along with 500 others, including his three sisters, of inciting violence, riot and sabotage.

Mr Halawa’s three sisters were released after about three months and were allowed to return home to Dublin, but he remained in jail.

In an interview with RTÉ News‏ at One, his sister Nosayba Halawa, said the family was “delighted” by the news.

She said they had been watching the trial online: “We couldn’t believe it. After all that suffering, it’s really come to the end.

Amnesty International welcomed the verdict, adding that “a mass trial alongside 493 other defendants can never be a fair trial”.

It added: “We hope he will soon be reunited with his family in Ireland.”

The President of Ireland Michael D. Higgins also welcomed the news, describing the last four years as “a prolonged, distressing and draining experience”.

He added: “Today’s decision brings to an end a long ordeal that Ibrahim, his family, friends and legal team have been put through.

“I am sure Ibrahim’s family are looking forward to the moment that Ibrahim will return to his home and loved ones.”

Irish Foreign Affairs Minister Simon Coveney tweeted that he would “work to get him home asap”.

In a statement, he added: “Ibrahim Halawa’s name has been cleared and his innocence is confirmed.

“I look forward to him being released from custody without delay.”

Mr Halawa’s trial got under way in August, having been adjourned more than 20 times.

In April, the Irish government arranged for a doctor to visit the Irishman in jail following concerns about his health.

He has staged a series of hunger strikes in protest against his imprisonment.

In March, his lawyer said he was so weak that jail staff used a wheelchair to take him to family visits.

Mr Halawa is the son of the most senior Muslim cleric in the Republic of Ireland.

At the time of their arrests, the Halawas were on a family holiday in their parents’ homeland.

Their trip coincided with violent anti-government protests in Cairo, staged in support of the ousted President Mohammed Morsi.

The family were arrested, along with many others, when Egyptian security forces stormed the Al-Fath mosque in August 2013.

Mr Halawa’s three sisters were released after about three months and were allowed to return home to Dublin, but he remained in jail.

For several years, Mr Halawa was told he would face the death penalty if he was convicted at a mass trial.

However, in January this year, the Egyptian president told a delegation of Irish politicians that he would offer a pardon Mr Halawa once his trial was over.

The family has always denied claims that Ibrahim is a member of the Muslim Brotherhood, which is Egypt’s oldest and largest Islamist organisation.

The current Egyptian government has declared it a terrorist group, a claim it rejects.

The Halawa siblings are Irish citizens whose family moved to the Republic of Ireland a year before Ibrahim was born.

Their father, Sheikh Hussein Halawa, is the Republic of Ireland’s most senior Muslim cleric.

The family lives in south County Dublin, where Mr Halawa is the imam at Ireland’s biggest mosque, in Clonskeagh.

The Irish government provided diplomatic support to the family since the four were arrested by the Egyptian authorities on 17 August 2013.

However, the Halawas repeatedly said their government could do more to negotiate his release.

In 2015, it was revealed that Ibrahim Halawa had once shared a cell with Australian journalist Peter Greste.

The former BBC correspondent spent more than 400 days in prison in Egypt after he was arrested along with two colleagues while working for al-Jazeera. 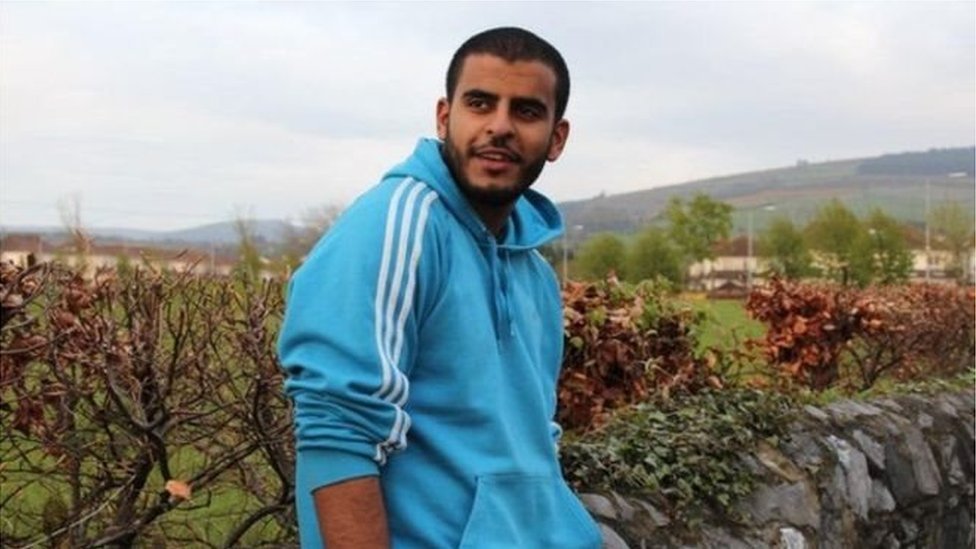 In pursuit of asylum on the US-Canada ...