The country that took in the most refugees in the world last year was Uganda. It is said to have one of the most generous refugee policies in the world, even giving new arrivals their own land. But how do you turn a plot of bush into a home, with nothing more than a machete?

Three, four, five, six, seven. A man in a blue anorak reads the numbers off his clipboard.

Women line up, many with babies strapped to their backs, a few with some belongings.

“Group two: where are you?” the man with the clipboard calls. “Come.”

Maybe a dozen women follow him up the hill.

Part way up the hill, the man stops.

He gestures to the woman at the front of the queue.

“This is your plot,” the man says.

“You’ll see,” he says – in English – and strides off the mud track into the bush.

The other women watching try to explain to her what’s going on. As the man paces 50m to show her where the boundary of her land is, she follows, pushing through the knee-high grass in her long blue dress, a baby tied to her back. She lifts her bag above the bushes and ducks under tree branches.

This is Ugandan refugee policy in action in Rhino Extension camp, one of several settlements in north-western Uganda which have so far received more than a million people fleeing South Sudan’s civil war. Said to be the country with the most generous refugee policy in the world, Uganda gives new arrivals land. They’re encouraged to make a life there, to farm – aid agencies give them seeds to grow crops. Some get goats.

But first they have to build a home.

How do you build a house?

That’s what I’m thinking. I wonder if that’s what the woman in blue is thinking.

She’ll be given a sheet of plastic, some wooden poles and rope. That’s apparently what you need to build a home here. And a machete. Because before she builds anything, she’ll have to clear the wild bush land.

She smiles uncertainly – looks, frankly, bemused – as the line of women and children trudge on up the hill, leaving her behind.

A little further on and the line is stopped again. A young single mother, Josephine Fony, a toddler strapped to her back, is led off the track into the bush. She blinks in the direction of the man with the clipboard who’s dashed off, pacing out her boundary line. She can’t see him. She can’t see more than three metres in front of her.

Quickly the man moves on, leading the line further up the hill.

“This land is not suitable,” Josephine says. “Who is going to prepare it for me?” She reveals that she’s not just very short-sighted, she had surgery three months ago and the scar on her side is still sore.

The most vulnerable refugees are given help building their shelter, but it’s not clear that Josephine qualifies for that assistance.

She looks around. There’s a large bush just behind her. “We’ll sleep under there tonight,” she says.

There’s a fallen branch in front of her. She drags it to the side. It’s a small start. The rest of the 50 sq m of wild rocky bush land will be much harder to clear. As well as a machete, she’ll need at least a hoe, and a lot of strength. I wonder where she’ll get that.

Josephine starts back down the hill to collect her few belongings and, as she leaves, she pauses to snap a twig on a tree – so that she can distinguish her plot from the others when she returns.

She seems to be reluctantly accepting that this is her new home.

A 30km drive away, in the neighbouring district of Yumbe, I have a glimpse of what might be in Josephine’s near future. Home to more than 275,000 refugees, Bidi Bidi settlement is the largest of the refugee settlements in Northern Uganda – and, in the world.

It’s been open a year, and gone is the wild bush land and most of the plastic-covered shacks. In their place is smoothed mud ground and small mud-brick houses with thatched roofs.

It’s amazing to think that this transformation has occurred so quickly – and all of it done by hand.

In one village – the settlement is organised into zones and villages – I find a young woman, Christine Aisha, who arrived in Uganda a year ago without her husband, who she says is a rebel soldier. That fact makes her unpopular with her neighbours, and she feels like she’s always being watched.

She shows me round her land. In one mud hut – which she built herself – there’s a kitchen, in another a bed for her children, and in a third, a double bed which a friend gave to her, where she sleeps. At the door of her bedroom, she’s planted flowers. And behind the small buildings, she’s growing maize, tomatoes, okra and aubergine.

To get the money for the roof, she is fostering a young refugee with special needs. She named the girl Mercy.

Life’s not easy though, Christine says. Mercy requires a lot of attention, she has six other children to care for and she is unhappy with the local school, which is hopelessly over-subscribed. And now, termites are eating her new roof.

For the time being, Josephine and the other new arrivals at Rhino Camp Extension can only dream of a roof over their heads, with or without termites.

A hundred metres or so up the mud track from Josephine’s land, I find Rose Abua, her friend and neighbour from Sudan, with whom she made the difficult journey to Uganda.

She is sizing up her new home, which is indistinguishable from Josephine’s: grassy land, interrupted only by rocks, bushes and trees.

Does she feel confident she can clear the land and build a house herself, I ask.

Throughout our conversation, there’s a little boy on her back, babbling away. He’s very sweet and I wonder what he’s saying. She listens, and laughs. He’s saying he’s hungry – that it’s time for his mama to cook.

Rose heads down the hill to claim her food rations.

•The Ugandan government has negotiated with 200 community landowners, who have donated bush land to host the refugee settlements in Northern Uganda

•The landowners hope to benefit from the development of the land, as schools, clinics and roads are built by international aid agencies for use by refugees and local people

Listen to Assignment: Starting from Scratch in Uganda on the BBC World Service 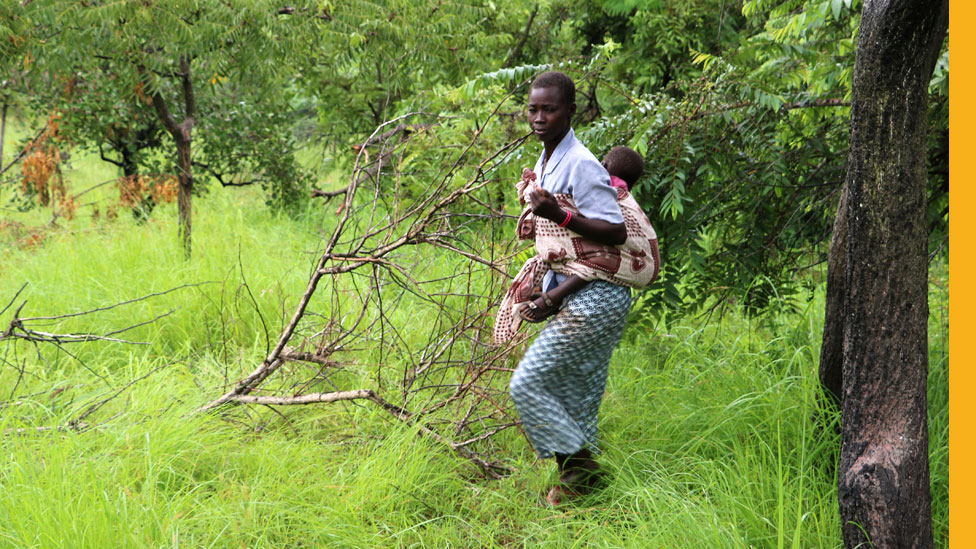