About 100,000 people have arrived on Italian shores this year, after making the perilous journey across the Mediterranean from Libya.

They are joining many thousands more asylum seekers and migrants already in the country – many stuck there after other European countries closed their borders.

About 450 of them can be found in the Fenoglio camp, outside Turin, which is run by the Italian Red Cross.

It is supposed to be a transit camp, from where migrants are quickly transferred to reception centres – but the logjam in the system means many end up spending months here.

Photographer Marco Panzetti met the inhabitants of the camp on behalf of the Red Cross.

Conditions are cramped. Couples sleep eight to a tent, with only hanging sheets for privacy.

Above, a young couple from Mali, 23-year-old Yakaub and his pregnant wife Mohamed Fatima, 20, sit inside their tent.

There are blocks of showers and toilets at the camp’s edge, and a communal kitchen that serves breakfast, lunch and dinner.

Michael is from Nigeria and has been living in Fenoglio for four months. He fled to Libya, where he intended to stay, because of conflict in his homeland.

However, because of his Christian faith, he became increasingly concerned about his safety and decided to make the crossing to Europe this summer.

“It’s risky crossing the sea,” he says. “If your home is good you won’t leave there, you won’t take such risks. We hear the stories of thousands of people who died looking for a green pasture.”

Like many others, Michael is waiting to be transferred to a formal reception centre, where he will live while waiting for his asylum claim to be heard.

“All we do here is eat and sleep, just waiting for the transfer,” he says.

Fenoglio is also home to a smaller number of people who made the crossing to Italy in previous years.

Mohammed, 21, is busy tending to cucumbers, having found some work at a local organic farm. Originally from Gambia, he arrived in Europe almost three years ago.

But while some residents of the camp are there for the long haul, others are on the move.

A group of Eritreans are leaving the camp on a bus going to Rome, from where many will be taken to other European countries as part of the EU’s resettlement programme.

Among them are Stezgi Wamn, 22, Rigat Kebede, 18 and their newborn son Bitab, who arrived back at the camp from the hospital that very morning.

Abadit Tesfay, 25, and her 10-month-old son Melab will also be on the bus to Rome, from where they will go to Norway to live with her husband’s family.

Raja, 27, from Pakistan, is also employed by the farm as a baker.

“I like cooking,” he says, “it’s not hard for me. In Pakistan I used to bake some sweets, some curries.”

Raja arrived in Italy in 2015, at the height of the European refugee crisis, having fled Pakistan after his father was killed in gang violence. He travelled through Iran to Turkey and then made the crossing to Greece, eventually reaching Italy overland.

His wife and two daughters stayed behind in Pakistan and for eight months, they lost contact. The Red Cross was able to put them back in touch and he is now hoping they can join him in Italy.

After over two years in Italy, Emmanuel is another refugee who works in the camp, cleaning and handing out food.

“Every day we do a distribution of things, give them T-shirts, trousers, shampoo, tissue paper, everything. Helping people like me who came through Libya,” he says.

At the start of this year, Emmanuel joined 14 other refugees from the camp to help the rescue effort following the Amatrice earthquake in central Italy.

“We went there to help people. We were helping Italians because they helped us first, so when they needed our help I had to go there and show them love and help them too.

“The Italians were surprised… it was really cool.”

Each morning residents queue for the chance to call their families. They are only allowed five minutes, but provide a vital connection to loved ones back home.

Many languages can be heard when people call home. One of those calling is 37-year-old Tesfu, from Eritrea.

“Yesterday I called my mother and father, it was very nice. Today it is my wife’s turn.” 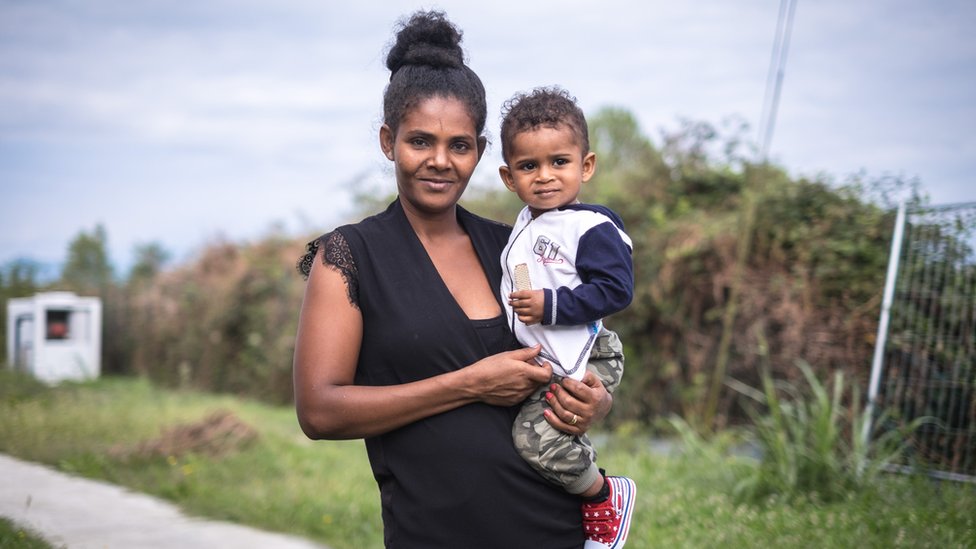