The world number one powered to a 6-3 6-3 6-4 victory in Sunday’s final at Flushing Meadows.

The Spaniard, 31, has now won two Slams in the same year for the first time since 2013, having won the French Open in June.

“After a couple of years with some troubles, injuries, sometimes playing not good – since the beginning of the season it has been very, very emotional.”

The US Open was the last Grand Slam where he was working alongside his uncle Toni, with Carlos Moya taking sole charge of coaching from 2018.

“I can’t thank him enough for all the things he did for me,” Nadal said of his uncle.

“Probably without him I would never be playing tennis and it’s great I had somebody like him pushing me all the time.”

The result means this year’s major titles are shared between Nadal, at the French and US Opens, and Roger Federer, at the Australian Open and Wimbledon.

Federer remains at the top of the men’s all-time Grand Slam list with 19 titles, three ahead of Nadal, who has now won 10 French titles, three US, two Wimbledon and one Australian.

Nadal went into the final with a 4-0 head-to-head record against Anderson, and he dominated once again.

The 2010 and 2013 champion lost just 15 points on serve in the entire match, did not face a break point and won all 16 points he finished at the net.

It was a ruthless demolition job by a man playing his 23rd Grand Slam final, up against an opponent in his first.

Anderson, 31, was the tallest player ever to feature in a Grand Slam final at 6ft 8in, and with a tournament-leading 114 aces was always going to rely on his serve to get a foothold in the match.

The signs were not good, therefore, when he had to fight through six deuces in his second and third service games as Nadal pressed hard.

Anderson clearly felt the need to play to his limits from the outset, attacking the net more than normal to try to keep the points short, but it brought mixed results at best.

The pressure told in game seven when the South African pulled a forehand into the tramlines facing a sixth break point.

Nadal would break again to seal the set with a wonderful backhand drop volley, and Anderson ended the set with just eight winners from 19 trips to the net.

The second set followed a similar pattern, with Nadal again untroubled on serve and this time making the breakthrough in game six with some sharp volleying.

By the time he whipped a forehand cross-court winner to take a two-set lead, Nadal had lost just seven points in nine service games.

A wild Anderson forehand on break point at the start of the third hastened the end of the contest, and Nadal would clinch the title on his second match point with a clinical serve-volley.

The South African praised Nadal as one of his idols, saying, “I know we’re the same age but I feel like I’ve been watching you my whole life.

“You’re one of the toughest competitors in the game and one of the greatest ambassadors of our sport.

“This isn’t the result I always wanted but I’ll keep fighting and I’ll be back.”

Anderson came out with an aggressive intent at the start of his first Grand Slam final, but still had to negotiate 12 deuces and save four break points just to win his first three service games.

Almost inevitably, the break came in the very next game and the pattern of the match was set.

Nadal stood a good five metres behind the baseline to get a better read on Anderson’s powerful serve, and when the South African did get a mid-court ball to attack, he too often missed his mark.

Being able to win on the hard courts of New York as well as on the clay of Roland Garros will mean so much to Nadal – it has also ensured he is very likely to end the year as world number 1 for a fourth time.

Nadal and Roger Federer have shared this year’s Grand Slam titles: remarkable given that, last October, when Federer visited Nadal’s academy in Mallorca, they were only fit enough to play soft tennis with the juniors. 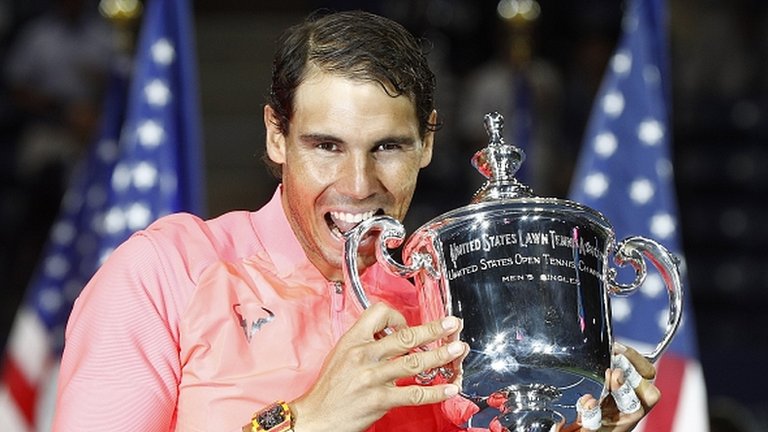