A five-man Normalisation Committee has been appointed by Fifa to manage football in Cameroon for the next six months, with Fifa delegate Veron Mosengo-Omba urging Cameroonians to “help the committee.”

“Cameroonians should help this committee because it is about football, you know how football is in this country, I always say Cameroon is Brazil and Argentina together in Africa,” Veron Mosengo-Omba told BBC Sport.

There have been internal wrangles in Cameroon since elections in 2015 were annulled by the Cameroon National Sports and Olympic Committee’s arbitration chamber.

That decision was then confirmed by the Court of Arbitration for Sport (CAS).

Fifa’s Veron Mosengo-Omba says the country’s footballing issues now need to be addressed by all sections of society.

“I just underlined that football on the pitch is not a problem, but the problem is organisation, the management of football, so you need to assist this committee to put order in the house.

“That is why I need journalists, government and all Cameroonians to help the committee.

“Football does not belong to men, women must also be involved,” Mosengo-Omba added.

“Your priority should be to put in place structures and texts for the harmonious development of football”.

“Government reiterates its commitment to accompany you for serenity to return to the Cameroon football family”, the Minister said. 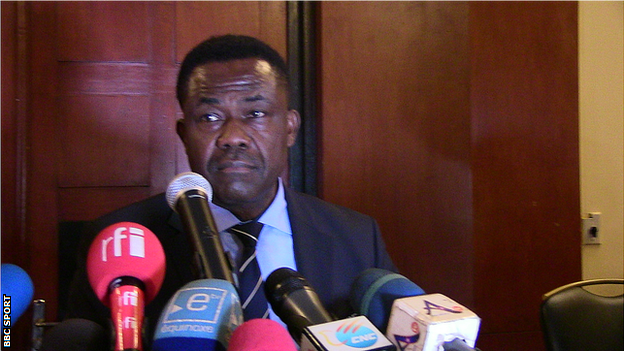